GIT UP AND GO

While you can't tell it from our relatively docile and unchanging homepage, Bravoflix has been working very hard lately.  In addition to slowly infiltrating every corner of the globe (we recently returned from Mexico City...see pic below), we've been tinkering with technology non-stop in the Skunkworks of High Art.   We've spent the last several weeks learning how to get up and go with Git.

What is Git, you ask?  Git is how multiple website developers work with the intricacies of a large code base without tripping over one another's keyboards.  It's a coding tool that allows a team of programmers to make simultaneous and remote changes to our secret sauce all at once and in parallel without mucking it up.

To put it in a brand-related perspective, pretend we were selling soda pop instead of culture, and that we had to innovate or die.  It's actually quite possible that one of our competitors--say, Coca Cola--might enable evil masterminds and mad scientists distributed all over the world to help them make their formula even more addictive.  Perhaps they'd manipulate robotic arms through the internet to tinker with the highly toxic and explosive chemicals in their central lab.  To remain competitive in a world where such unspeakable evil is possible, we had to do something radical to preserve and improve our brand of soda.  So: we beamed it up to Mars.

With the secret formula for our special reserve (the Bravoflix code base) at stake, and so many people working on it remotely, we would want to know who made what changes to the formula and when, and would want to merge all the best changes together before cooking up a new batch of brew and delivering our syrup-filled bottles to your local grocer.  How, you might ask, would we let more than one chef throw new junk into our proverbial pot of computer code without spoiling the broth?  If one chef made a caffeine-induced mistake and, for instance, put so much phosphorous into the mix that it'd melt your face, how could we find and fix such an error before you ended up drinking it?  With no way to monitor and correct these blunders, we were afraid it could seriously compromise the commercial success of our attempt to Refresh Everything with super sweet streaming and on-demand cultural video goodness.  Moreover, one of our competitors might come up with some cool feature that'd make us lose the cultural space race...if we didn't have a safe way to bang on our code and see what we can make it do.

So, the process that Bravoflix now adheres to, which is tantamount in its complexity to launching the Space Shuttle, is called version control.  The tool we use to talk to one another during this process is called Git.  Over the last few weeks, while you were sleeping, Bravoflix graduated from being a hack'ish one man band to being connected...I mean really connected--like Joe Pesci in Goodfellas--to the entire global Illuminati of Git loving programmers everywhere.

This was not easy.  We had to kill somebody.  Namely, we offed ourselves...because, as it turns out, Git does not like permitting 'puter machine mafiosos to access a working version of a website's code.   In other words, we couldn't use Git to make changes to our active, live site...not directly anyway.  We needed plausible deniability.  We needed to proceed in a once removed, Cosa Nostra sort of way.  So, how did we set that up?  We let our active site do all the dirty work, like George Dubya sending in Colin Powell to plead with the U.N...  We let the active working site automatically ask Git for changes when we weren't suspiciously hanging around.

Git readily lets programmers store their changes to a website's code in a repository--which is essentially a virtual vault, a digital Fort Knox, or, more nefariously if you will, something akin to a (supposedly) highly guarded chemical weapons depot in the middle of the Iraq desert.  Like Colin Powel pleading to the U.N., our website's server claimed to Git, in spite of what its satellites did or didn't see--that in a remote repository--are hidden WMDs (Weapons of Mass Delight).

Meanwhile, before our server actually has to address Git on our behalf, like CIA operatives trying to save the face of our nation, we haul barrels of changes into that remote and dusty ol' depot...errr...repository.  Once were gone, the Bravoflix server makes its plea to Git, and Git lets it automagically go in and Git stuff out.  Now we have a reason to go and depose the despots of crappy and meaningless internet TV programming, to liberate imaginations, and occupy far off lands with creative beauty.  THAT, my arts-fanatic friend, is some crazy advanced technology.  Not a single site for cultural connoisseurs is doing anything remotely so "Beam me up, Scotty" futuristic.  I could tell you how we did it, but then I'd have to kill you...a'ight?

Okay, okay, okay...!!! Please don't twist my arm again!  I crumble under torture, and I ain't got the guts to bite into my fake tooth loaded with cyanide.  If you must know, there's a diagram of how we did it here. (WARNING: not for the technically squeamish!)  Just think of our active site as Saturn or "Prime", and the depot as Mars or the "Hub".   The communication between Saturn and Mars is automated.  The "Clones" are all the Illuminati programmers orbiting the globe.  They're using their flying saucers to transport stuff to  Mars...which in turn will be automatically beamed up to Saturn (our live Bravoflix server) when we're not around.   Git is like the radiowaves bouncing and beaming stuff back and forth between all of these orbiting bodies.  If it sounds like a bad Sci Fi channel mini-series, it is.  But seriously: trading this information with competing websites in England or France or Germany or the Netherlands is high treason and grounds for execution.  Like the Smoking Man from the X-Files, we're watching you.  (Gawd, I miss Scully.)

If you want to know more about Git for use in your own site or development workflow, I can enthusiastically recommend the following instructional video taught by Alex Hillman of Beanstalk...exclusively available at AppSumo:

It's worth every penny.  You can pay $195 for one of GitHub's online training sessions, or vastly less for AppSumo's solid introduction to version control.  I downloaded the AppSumo video to my harddrive so I could review it on the road, even while en route to Mexico City where, at times--for instance, while being jammed up by Federales for overt gringoism--I had a crummy connection.  I also dug the video because it allowed let me pause and take notes when I wanted, thus enabling me to draft my own Git cheat sheet.  Moreover, the video format is nicely indexed, and I can rewind or replay any section of it when necessary to soak in all of Alex Hillman's gooey Git wisdom a second time around...if so desired.  Alex's instruction is super clear, perfectly appropriate for a newb like myself, and easy to absorb and apply.  Without it, my developers would hate me.  Thanks to AppSumo, only after watching this video was I ready for the sort of interplanetary travel enjoyed by the programming Illuminati elite.  Bravoflix plans to make full use of this perk to conquer the world. 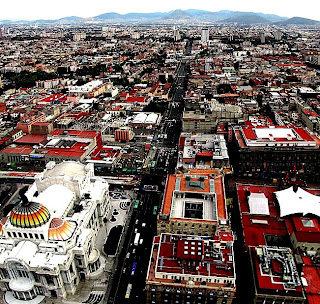 In the lower left: El Palacio de Belles Artes in Mexico City--where the memorial concert for the celebrated opera composer, the late maestro Daniel Catán (my mentor) was held under the baton of his long-time friend and musical champion, Eduardo Diazmunoz. Mexico City is a valley--and was once, essentially, an island in a lake. This is the view Southward from the fifth tallest building in Mexico City. Volcanos which overlook the valley are off frame, to the West. The view 360-degrees around is not too dissimilar to this in terms of geography, density, color, and variety of architecture.  Mexico City has a vibrant cultural life, rich with the finest performing arts.  El Palacio de Belles Artes ranks among the finest opera houses in the world.  Moreover, the Met's live simulcasts to cineplex theaters are better attended here--in the city's Nacional Auditorium--more so than at any other venue on the planet.  Not hundreds, but thousands of people show up to watch the Met's performances streamed live to the big screen.  Mexico City is ready to adopt some of the heavy duty Star Wars technology that Bravoflix is using.  Don't think so...?  I know some guys who might want to tighten yous up...jus' a li'l bit.  There's a place for Bravoflix--and the finer legacies of all cultures--on this great big crazy blue rock we call the Earth...I swear!

Want to stay in touch?